King Taejo (Wang Kon) of Koryo Dynasty (태조; b. 877 - d. 943; birth name: Wang Kon (왕건)) - the founding king of the Koryo Dynasty, one of the great Korean dynasties, which lasted from 918 to 1392. The term "Taejo" is an honorific term referring to the founding father or king of a dynasty, and has been used for other such kings during Korea's history.

​King Taejo Wang Kon, a military general, became the founding king of the Koryo Dynasty in 918 through a military coup d'état. He is also credited for the complete unification of the entire Korean Peninsula - the first true and lasting unification in Korea's history - in 936. This unification, in fact, lasted until 1948, when the Korean Peninsula was divided into two Koreas by the Soviet Union and the United States following World War II (see our subchapter on the Korean War).​

NOTE: The name "Korea" is derived from "Koryo" based on several factors, including early European influences. 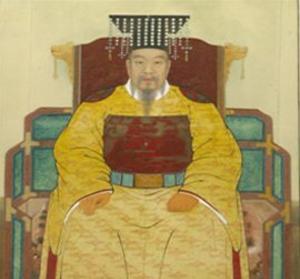