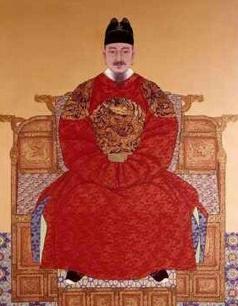 ​King Sejong the Great (세종대왕;  b. May 1397 – d. April 1450; birth name: Yi Do (이도)) - the fourth king of Korea's Joseon/Chosun Dynasty (1392-1897). He reigned from 1418 to 1450, and he is arguably the most prominent ruler in Korean history for implementing major social, economic, scientific, and legal reforms and advancements. But perhaps most importantly, he created the Korean alphabet, known as Hangul (한글). Prior to the creation of the Korean alphabet, Koreans used Hanja (한자), Chinese characters adopted by Koreans reflecting Korean pronunciation, for writing purposes.

He is also the only other Korean king - other than King GwangGaeTo the Great (see our subchapter on this great ruler) - to be given the added honorific title of “the Great” in its 6,000 year history.

NOTE: The Hangul is one of only six pure alphabets created and used in the history of the world. It was created circa late 1443 or early 1444, and was first published in 1446 in a document titled Hunmin Jeong-Eum (훈민정음) ("The Proper Sounds for the Education of the People"). King Sejong reportedly explained that he created the new alphabet for the common Korean people because Hanja was not a good fit for the Korean language and was also too difficult to learn. King Sejong believed that the use of Hanja kept majority of Koreans illiterate since only the privileged male aristocrats (the Yangban class) could afford the time and education to learn to read and write Hanja fluently.

Statue of King Sejong the Great in Seoul​. 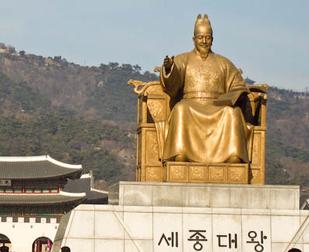