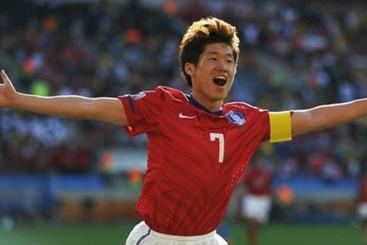 Park Ji-Sung (박지성; b. February 1981) - the greatest South Korean soccer player of the past two decades, he was the first Korean player to be signed by an English/Barclays Premier League club, the famed Manchester United, back in July 2005. As midfielder for Manchester United from 2005-2012, he helped Man U win four Premier League titles, as well as the 2007-2008 UEFA Champions League title, making him the first Asian footballer to play in, and to win, the UEFA Champions League title. More significantly, Park also played in three World Cups as a member of the South Korean national team (2002, 2006 and 2010), for which he also served as the team's captain at one point.