Korean War Veterans Memorial - dedicated on July 27, 1995, to commemorate the 42nd anniversary of the armistice that ended the Korean War, this Memorial remembers the sacrifice of the reported 5.8 million Americans who served in the U.S. armed services during the three-year conflict, along with the approximate 37,000 American soldiers who died and over 100,000 Americans who were wounded. This Memorial is located southeast of the Lincoln Memorial and south of the Reflecting Pool on the National Mall in Washington, D.C. 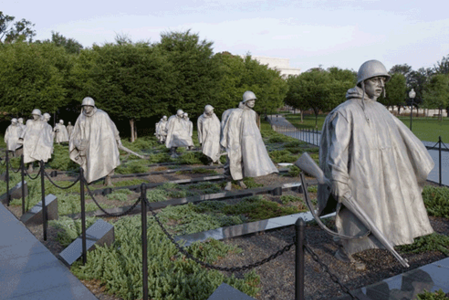