The earliest surviving depiction of the flag was printed in a U.S. Navy book Flags of Maritime Nations in July 1882. 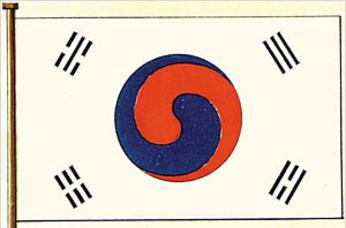 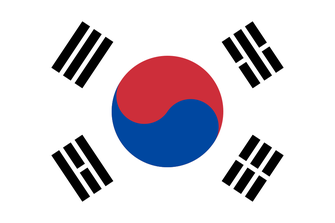 Flag of South Korea (Tae-Guk-Gi; 태극기 - literally translated as "supreme ultimate flag") - the current version of the South Korean Flag (see top right) reflects only minor modifications to its  predecessor from August 15, 1948, when the South Korean nation with its independent government was officially established.

It is reported that up until 1882, the Korean Empire (under the Joseon/Chosun Dynasty) still had no national flag, apparently viewing such a national symbol as being unimportant or unnecessary. As further reported, in response to continually emerging international and diplomatic engagements with other foreign nations, including Japan and the United States, the Korean government finally designed and adopted the first version of Tae-Guk-Gi (see bottom right), which the Joseon/Chosun government officially adopted as the national flag in 1883.