​Ko Un (Birth Name: 고은태; b. August 1933) - considered internationally as South Korea's most famous and leading poet, Mr. Ko, for many years, has been one of South Korea's leading candidates for the Nobel Prize in Literature.

In addition, Mr. Ko had long been an activist in the movement for democracy, political reforms, and human rights in South Korea, during which time he was imprisoned and tortured as a political prisoner.

As a prolific writer, Mr. Ko has published more than 100 books, has twice won the South Korean Literature Prize, and has taught at several leading academic institutions, including Seoul National University and Harvard University.

To learn more about Mr. Ko, please refer to the following link from The Poetry Foundation: https://www.poetryfoundation.org/poets/ko-un-56d207070306a 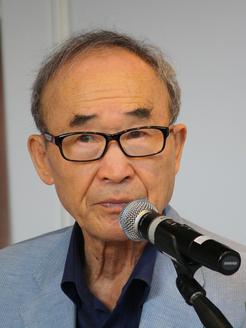