​Kim Gu (김구; b. August 1876 - d. June 1949) (Pen name: 백범 ​(Baekbeom)) - one of the most prominent leaders of the Korean independence movement against the Japanese Empire during its colonization of Korea from 1910 to 1945. He also, at one point, served as the head of the Provisional Government of the Republic of Korea, as well as the leading activist for the reunification of Korea after WWII ended and the division of control of Korea by the two victorious superpowers – the United States and the Soviet Union.

Kim Gu is a recipient of South Korea's Order of Merit for National Foundation.

NOTE:  The Provisional Government of the Republic of Korea was the Korean government in exile and based in China during the Japanese colonization of Korea.  One of its principal goals was to liberate Korea from Japanese occupation/colonization.  It was reportedly formed in 1919 following the infamous March 1st Movement  (3.1 운동), a non-violent resistance movement by Koreans against Japanese occupation, which was violently suppressed by the Japanese government.

For more information on the March 1st Movement, please see our subchapter on the Colonization of Korea by Japan. 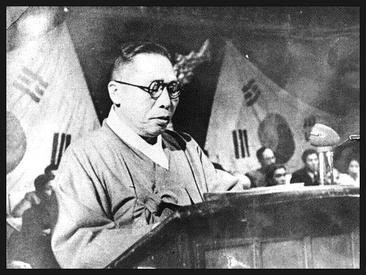