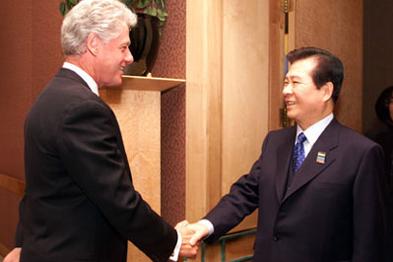 ​Kim Dae-Jung (김대중; ​b. January 1924 - d. August 2009) - a long-time pro-democracy, reform and opposition leader in South Korean history, he was elected as the 8th President of South Korea and served from 1998 to 2003. His lengthy background as a Korean human rights activist, a Korea reunification advocate and a political prisoner, who was frequently imprisoned or exiled by the Korean ruling autocrats, is well documented.

In 2000, he received the Nobel Peace Prize, becoming the only Korean to ever receive the highly prestigious Nobel Prize in any field.