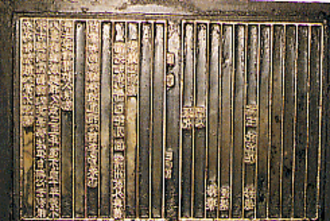 Jik-Ji (직지; 1377) - as confirmed by UNESCO (United Nations Educational, Scientific and Cultural Organization), Jik-Ji is the world's oldest book printed using the movable metal type in history. Printed in 1377, it predates Gutenberg's Bible by approximately 78 years. The full title of Jik-Ji has been translated as "Anthology of Great Buddhist Priests' Zen Teachings," and it was produced during Korea's Goryeo/Koryo Dynasty (918-1392). The Jik-Ji is reportedly a collection of excerpts or quotes of the great Buddhist monks of many generations to serve as a guide for students of Buddhism, which was then Korea's national religion.