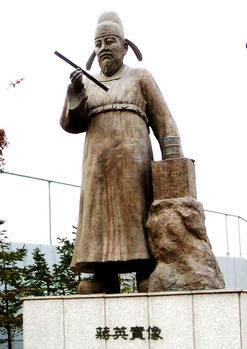 ​Jang Yeong-Sil (장영실; b. circa 1390 - d. after 1442) - a Korean scientist and astronomer during the Joseon/Chosun Dynasty, he was reportedly selected and recruited by King Sejong the Great to serve in the royal court, where he invented or is credited with inventing various important technological tools. Although born as a peasant/commoner, through King Sejong the Great's reform of the civil service system, Jang was able to showcase his talents for the advancement of Korea.

​Jang is credited with, or contributed to, several significant inventions, including the Korean celestial globe, the Korean sundial, improved weaponry by developing better metal alloys, and his greatest inventions, the rain gauge and the water gauge to improve Korea's agricultural production.  ​​