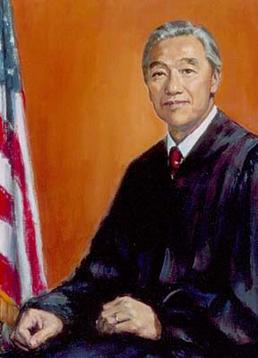 Honorable Herbert Choy (Choi) (최영조; b. January 1916 - d. March 2004) - the first Korean-American to be admitted to the bar (licensed attorney) in the U.S. (after graduating from Harvard Law School in 1941), he had served as the Attorney General of Hawaii and was, most significantly, the first Asian-American to serve as a federal judge in the United States. In 1971, President Nixon nominated him to the highly influential United States Court of Appeals for the Ninth Circuit (13 such Courts of Appeals in the United States sit immediately below the U.S. Supreme Court), where he actively served until 1984 - making Judge Choi the most prominent Korean-American jurist in U.S. history.

In terms of his early background, he was born in Hawaii to Korean immigrants who reportedly worked in sugar plantations. Reports further advise that, on December 8, 1941, when the U.S. declared war on Japan following Japan's December 7, 1941 bombing of Pearl Harbor, Judge Choi enlisted with the U.S Army. (NOTE: This was still during Japan's colonization of Korea, and he had just graduated from Harvard Law School).

As for his active service with the U.S Army, it is reported that he served in both Japan and Korea as a lieutenant and then as a captain, in part serving as a member of the Army's Judge Advocate General's (JAG) Corps (the U.S. Army’s legal division addressing military law/justice).  He ultimately retired from military service as a lieutenant colonel in the Army Reserves JAG Corps.​