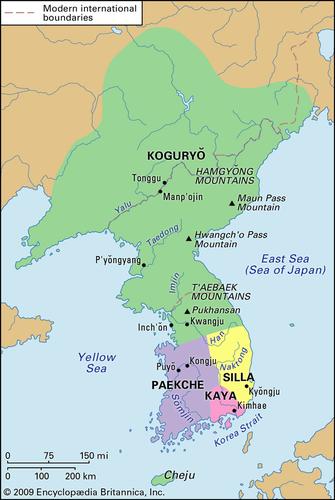 King GwangGaeTo the Great (광개토대왕; b. 374 – d. 413 (birth name: Ko Dam-Deok 고담덕)) – one of only two Korean kings given the added honorific title of “the Great” in its 6,000 year history (along with King Sejong the Great, see our subchapter on King Sejong), he was the King of the northern Goguryeo Kingdom (고구려 ​- the ancient or the original Koryo Kingdom/Dynasty), one of the ancient Three Kingdoms of Korea.  As indicated by his given title (GwangGaeTo, which reportedly translates to Broad Expander of Domain), he greatly expanded his kingdom by numerous conquests into parts of now southeast China and Russia (north of the current North Korea), thereby making the Goguryeo Kingdom one of the great empires/powers of Asia.

On the Korean peninsula itself, he, at one point, also subdued and/or defeated the other two ancient Kingdoms of Korea (Baekje and Silla), allowing for a temporary unification of Korea.  His feats and territorial expansion of Korea is recorded as establishing the largest and greatest Korea in terms of size and might, and hence he is regarded as one of Korea’s greatest heroes and remembered by historical television dramas.