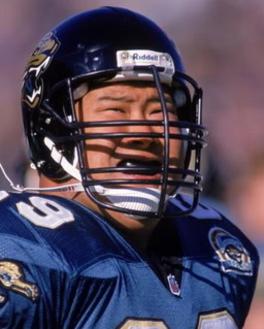 Eugene Yon Chung (b. June 1969) - the only Korean-American football player to be drafted in the first round in the National Football League (NFL) history (the 1992 NFL Draft, and the only Asian-American player drafted in the first round since 1962), he was the 13th overall pick (out of Virginia Tech) of the New England Patriots.  He played offensive tackle in the NFL from 1992 to 1997 with the Patriots, Jacksonville Jaguars, and the Indianapolis Colts. At present, Chung is reportedly an assistant coach for the Philadelphia Eagles.