Empress Myeong-Seong (명성황후; b. October 1851 - d. October 1895) - also known as Queen Min, she was the Queen Consort and the first wife of Gojong, who was the ineffective last king of the Joseon/Chosun Dynasty and the first emperor of the short-lived Korean Empire (1897-1910). Recognized as the source of true strength and wisdom behind her husband, she was a fierce defender of the Korean kingdom and was strongly anti-Japanese, for which she was assassinated by the Japanese on October 8, 1895, in what is known as the Eulmi incident (을미사변). The title of empress was bestowed on her posthumously.

While of noble birth, she was orphaned at an early age. She was still very focused on self-education and later known to have welcomed Christian missionaries into Korea, marking formal introduction of Christianity during the Joseon/Chosun Dynasty. For instance, Horace Newton Allen and Horace Grant Underwood were both welcomed during the Empress's reign, thereby introducing western education, medicine, etc. to Korea. 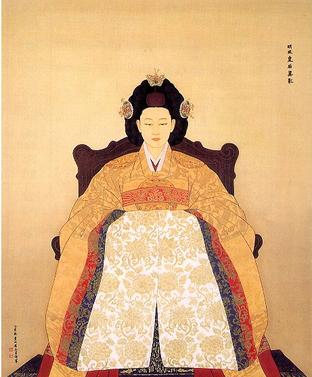