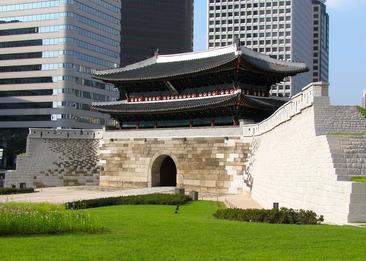 ​The Eight Gates of Seoul - originally built between 1396 and 1398 (during the Joseon/Chosun Dynasty), eight historical gates were built as part of the Fortress Wall to protect Seoul, the newly designated national capital during the Joseon/Chosun Dynasty. The Four Great Gates (사대문) were located surrounding Seoul at the four cardinal directions of the compass (North, West, South, and East), while the Four Small Gates (사소문) were located at the four intermediate directions of the compass (NW, NE, SE, and SW).

​At present, only six of the Eight Great Gates still exist (the West and the Southwest gates no longer exist). Of the six remaining gates, it is noted that Nam-Dae-Mun (남대문) (the South Great Gate, officially known as Sung-Nye-Mun (숭례문) (the Gate of Exalted Ceremonies), which is pictured herein), has been designated as the first national treasure of South Korea.

For more information on the Eight Great Gates of Seoul, please refer to the following weblink:​​​https://en.wikipedia.org/wiki/The_Eight_Gates_of_Seoul

The Eight Gates of Seoul