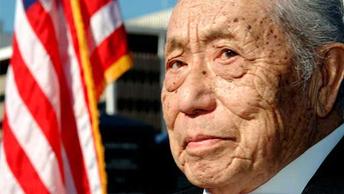 Colonel Young-Oak Kim (김영옥; b. January 1919 – d. December 2005) – the first Asian-American to command a combat battalion during wartime, he served the U.S. Army during WWII (seeing combat in both Italy and France) and the Korean War.  While serving the U.S. Army and this country for nearly 30 years, he became the most decorated Korean-American, receiving numerous military awards, including the U.S. Military’s Distinguished Service Cross (Army), three Purple Hearts (awarded to those wounded or killed in service), two Silver Stars and two Bronze Stars.  His awards/medals from non-U.S. nations include Italy’s Bronze Medal of Military Valor, France’s Croix de Guerre (Cross of War) and Légion d'honneur (the National Order of the Legion of Honour, reportedly the highest French order for military and civil merits), as well as South Korea’s TaeGuk Cordon (1st Class) of the Order of Military Merit, ROK’s highest recognition for military bravery and valor awarded to armed forces of the ROK and its allies.

After retiring from the U.S. military in 1972, Colonel Kim then essentially began his second career as a prominent leader of community service in the Los Angeles/Southern California area for decades.  His efforts included establishing and/or leading numerous community-based organizations dedicated to helping, for instance, the underprivileged youth, battered women and the elderly.  As further recognition of his contributions, the Young Oak Kim Academy (a new middle school in Los Angeles) opened in 2009, and the Young Oak Kim Center for Korean American Studies was established in 2010 at the University of California, Riverside.