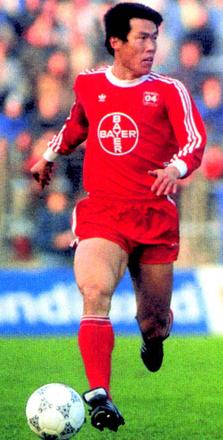 ​Cha Bum-Kun (차범근; b. May 1953) - widely regarded as the greatest soccer player/footballer in South Korean history, he was the first Korean footballer to play in Europe, playing for the powerhouse Bundesliga in Germany. From 1978 to 1989, he played for 3 Bundesliga clubs (SV Darmstadt 98, Eintracht Frankfurt and Bayer Leverkusen) as forward/striker, and he ultimately earned the title of Asia's Player of the Century by the International Federation of Football History and Statistics.

Cha, of course, also played for the South Korean national team, of which he is reported to be its all-time goal leader. His only appearance for his country in the World Cup, however, occurred in 1986 since South Korea did not qualify any other time during his career.